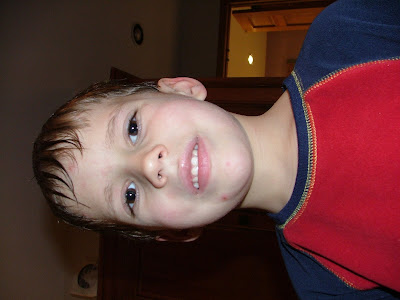 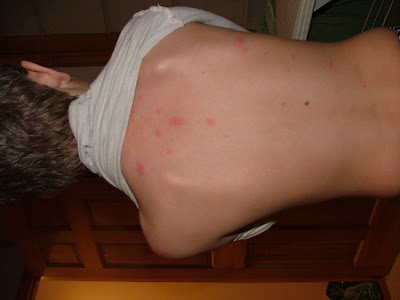 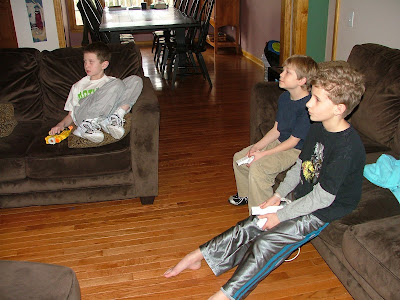 About 3 weeks ago right before his basketball game Luke came down with Chicken Pox.
I had gotten up early and gone to the grocery store and Mike had fixed waffles for the kids. Mike called me while I was on my way home and told me Luke had broken out with a rash and had a fever. He said he thought it was chicken pox. I wasn’t convinced because he had been vaccinated for chicken pox. After looking on the internet I agreed – it did look like chicken pox.
I called my friend Angela to tell her that Luke would not be at his game (her son, Andrew, is on the same team) and she said Andrew had chicken pox. I called my friend Misty to tell her that Luke wasn’t going to be at the game (her son, Landon, was on the team Luke was playing) – small town 🙂 She was working and had sent Landon on to the game with Joey, her husband, but said he had little red spots on him and she thought it was just a skin irriatation and sent him to play basketball because Landon begged to play and said he felt fine. She called Joey and he looked Landon over and – covered in chicken pox.
A few hours later Drew popped our some red spots. So in a matter of a few hours chicken pox epidemic!! All four kids had been vaccinated but had not had the booster. Emma had the vaccine in September before she went to school so she didn’t catch her brothers chicken pox.
There have been several other kids that have had chicken pox over the past few weeks – most had been vaccinated. They all have had fairly mild cases compared to the head to toe dots and days of fever that we had as kids The next day after the outbreak was Sunday so while my kids were still contagious I kept them home. I invited the other chicken pox kids and their siblings (who were possibly contagious) to come over and we had CHICKEN POX CHURCH. Here are pictures. They mostly played Wii and Legos but I did a short lesson about the 10 lepers. I thought that was a good lesson for chicken pox church. Also a picture of my boys after an oatmeal bath.

On the vaccination – I pretty much did most of the vaccines with my kids and have good friends on both sides of the vaccination debate. If your kids have had the vaccine – you might want to get the booster or expose your kids to someone with chicken pox so they can get it over with.
**disclaimer – this is just my opinion – not medical advice – 🙂