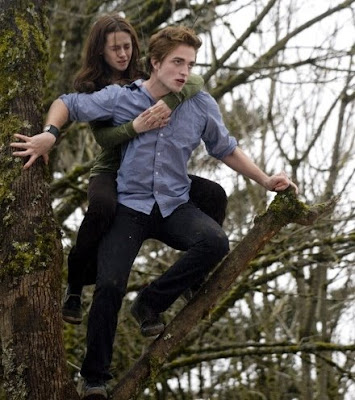 I got away for a little while on Saturday night and went to see Twilight with some girls from our youth group. I don’t think movies are ever as good as books but this movie did a good job sticking to the story line and characters. The only character that I thought they really messed up casting was Carlisle. Just not how I pictured him. One of the girls said she thought he looked like he should have been in a Dr.Seuss movie. Anyway, the movie was worth my $8 bucks.

Last night at youth Mike started teaching a series on temptation. The story of Bella and Edward is really one of temptation. Bella is Edwards greatest temptation. In the movie he tells her she is like heroine to him. He constantly fights the battle of being close to her and not killing her. He is able to overcome the temptation to have her for a snack because of his love for her. Bella on the other hand is completely unable to resist the temptation of Edward. She is unconditionally drawn to him no matter how dangerous being with him becomes. I had some good conversations with the girls about guys. Bella is resigned to the fact that no matter how hard she tries she can’t stop what is happening between her and Edward. Makes for a good love story but girls don’t forget that God has someone special for you. You may not have a choice about who you are attracted to, but you do have a choice about who you give your heart to. Make sure he is the kind of guy that God has planned for you. A guy that not only is after your heart but after God’s heart.

1 thought on “Twilight and Temptation”